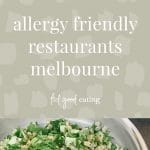 Eating out with a food allergy or intolerance can be a bit of a gamble, not only with the food but also the service. Having to explain your dietary requirements, check and double check menu items and in some cases send food back can leave a person feeling drained before they have even taken a bite.

Or worse, is being told in a patronising or bored voice that everything may contain traces of the allergen because the wait staff can’t be bothered having to deal with you.

I know this because I have lived all of these experiences eating out with my food allergies.

But I love food and I love exploring the Melbourne food scene (where my budget allows!), so I have been determined to not let my bad experiences put me off enjoying one of life’s biological pleasures: eating. 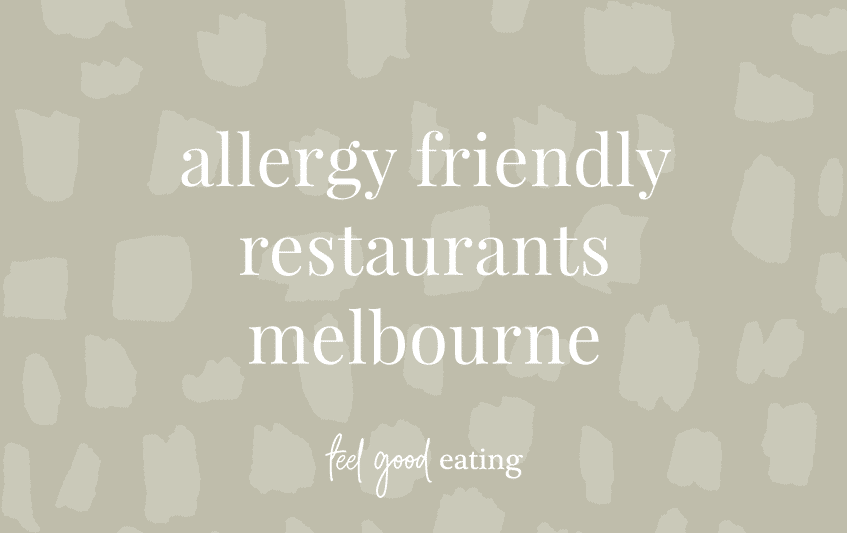 So, I have put together this Allergy Friendly Restaurants Melbourne list. These are places that I have eaten at where I received exceptional service with regards to my nut allergy. I would like to think that if they have looked after me that this would also apply to other dietary requirements.

Of course, this list is based purely on my subjective experience. But for those of you with allergies or intolerances, I hope you can use this list to ease a bit of the anxiety that comes with eating out. I will continue to add to this list as I come across more places with fantastic service.

Entrecôte is famous for their steak frites. Steak and potato seem pretty innocent as far as common food allergies are concerned, however, Entrecôte’s come with a butter and herb sauce that contains nuts and the salad that accompanies the meal has walnuts in it.

This was not an issue for the waiter or the kitchen. I was able to have a range of mustards and horseradish with my steak instead and the kitchen prepared me my own salad that was free of walnuts. When it came time for dessert, my waiter was all over it, advising me before I even had to ask which desserts I could choose from. And of course I chose dessert, after all, I was at a French restaurant! 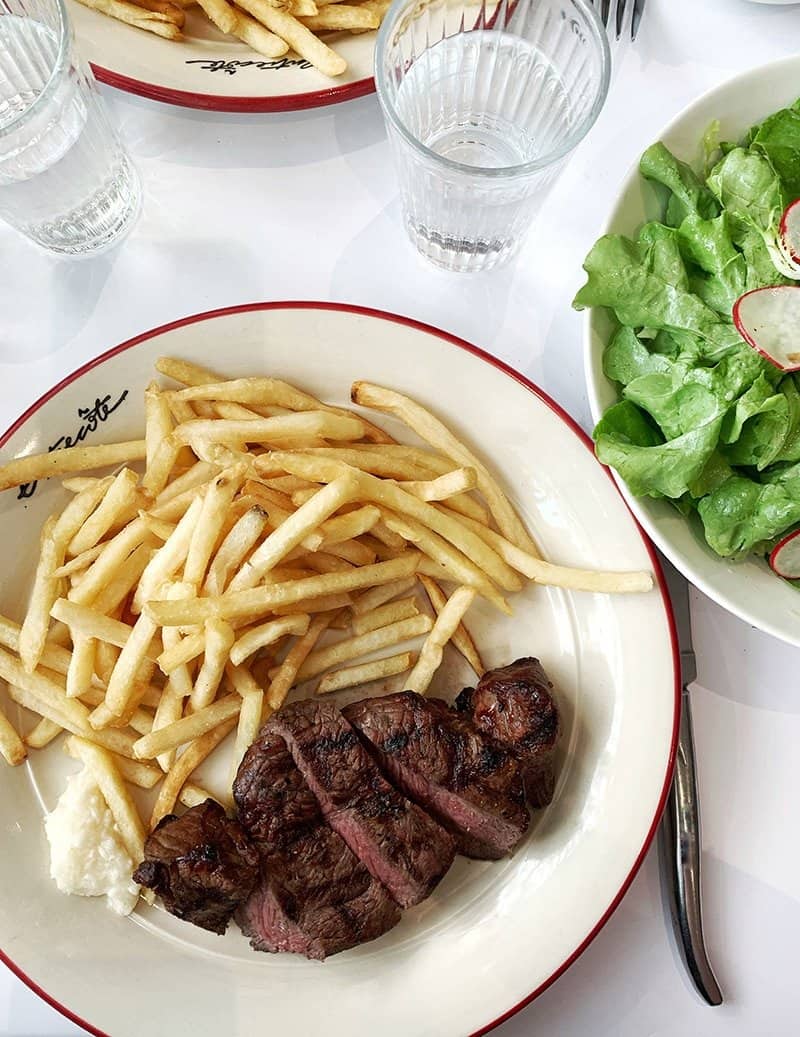 Gazi actually deserves a medal for how accommodating they are. I went there for lunch with around 30 of my fellow dietitians and I am not lying when I say almost half of us had some special dietary requirement. There was me with my nut allergy, vegetarians, people with coeliac disease, people with fructose malabsorption, people who can’t eat fish or seafood and then the triple whammy of a vegetarian who has coeliac disease AND fructose malabsorption! Obviously, we had given prior notice of all of these dietary requirements, but the guys at Gazi didn’t even bat an eyelid on the day, serving us our customised lunch boxes of Greek goodies.

I still dream about those fresh piping hot cinnamon doughnuts (made nut free for me of course!)…

I was a little anxious about eating at Gingerboy given that Asian food typically uses a lot of nuts. But I didn’t even have to mention my allergy as this was the first thing the waitress addressed as she handed out menus.

After speaking with the chef, she proceeded to go through the ENTIRE menu with me to let me know what did and didn’t contain nuts. The chef even offered to make anything on the menu nut free if I wanted. Nothing was a problem for the guys at Gingerboy and all of the dishes I tried were bursting with flavour.

Hell of the North

I am always a bit wary of ‘Feed Me’ options when I eat out because it adds a whole new level of complication to deal with. Will there be anything I eat? Are they willing to ‘feed me’ and accommodate my allergy? Will I end up going hungry because I can only eat 1/3 of what is offered? Will the ‘safe’ dishes end up being ones that I don’t actually enjoy eating?

Rest assured if you choose the Feed Me option at Hell of the North, you will not go hungry AND have your dietaries catered for. I have eaten here twice and both times have opted for the banquet with no issues. What is also great with Hell of the North, is that they check in with your taste preferences too – so if there are things on the menu you would rather NOT be a Feed Me option, they won’t serve it up to you!

Like Gingerboy, Lucy Liu is an Asian restaurant, so the chance of dishes containing nuts is quite high. I also took a bit of a gamble by just rocking up on their doorstep one weekend for lunch with no booking and no prior warning that I had food allergies. But this was no issue – Lucy Liu has a separate menu printed that outlines which menu items are suitable for different food allergies. I just ordered off that and it worked perfectly!

NOTE: as of July 2018, Nieuw Amsterdam is closed and will be re-opening under new management.

I was tossing up whether to add Nieuw Amsterdam to my list because their service has been a bit hit and miss depending on which waiter serves me. For example, on one occasion the waitress who seated us asked straight away who had the nut allergy and was extremely knowledgeable about the menu and which dishes were safe for me to eat without having to consult with the chef – I felt immediately at ease and trusted I was in good hands. However, I had a different waiter take our dessert order and he was a bit of a scatterbrain. I have been back a couple of times and have had consistently great service (even when having to eat from their set menu). 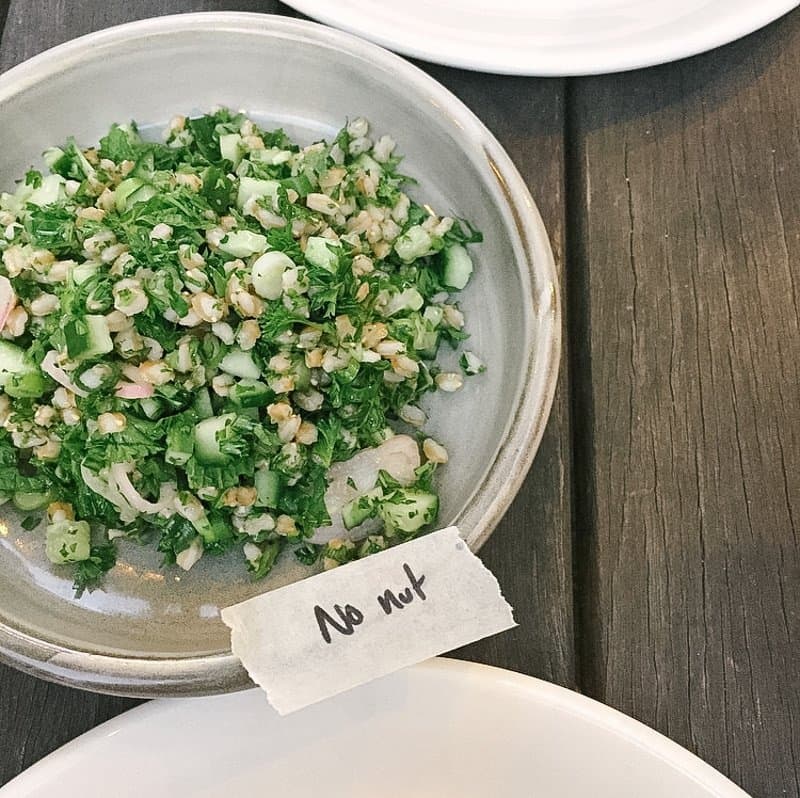 OK, so this one is hardly unexpected given how expensive it is to eat at Nobu! The waiter who seated us asked straight away who had the nut allergy and took the time to go through the menu with me to work out which dishes were OK for me to eat. Everything I ordered was double checked with the kitchen and the waiter even went as far as checking whether things like sesame and sesame oil were OK for me to eat just to be sure. 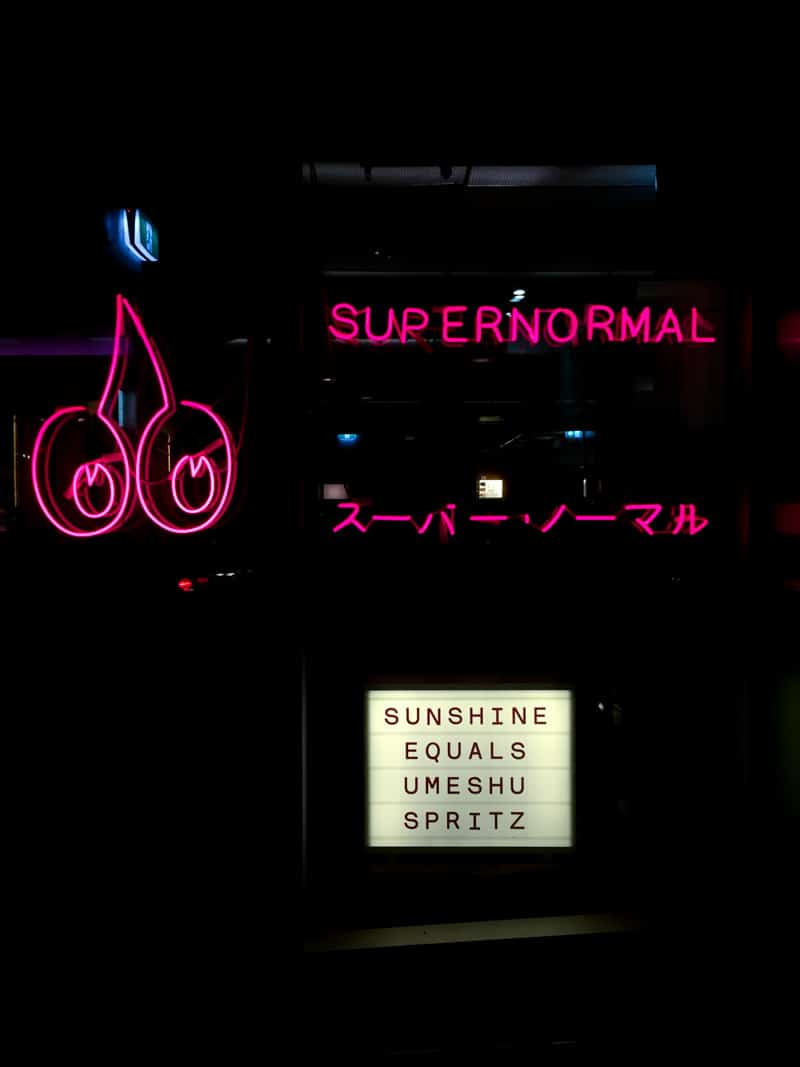 I felt completely at ease at Supernormal when my waiter was able to go through menu and confidently identify dishes that not only contained nuts or nut products, but those dishes that possibly contained traces of nuts because the ingredients that went into them were manufactured offsite. That level of detail, when put on the spot, was really impressive. I was also assured that if we decided to go with the banquet option, then all of the dishes would be modified to accommodate my allergies. After selecting the banquet, my waiter also came back a couple of times to check further details of my allergy (Was it just peanuts or all nuts?, Was I OK with sesame?, Did I have my EpiPen with me?)

What was also great about Supernormal was that they made up a separate portion of food that was allergen free, so that the rest of my table could still enjoy the dish as it was designed – nuts and all.

P.S. all of the food in the banquet was super tasty (see what I did there!) and I recommend going with that option if you just can’t decide which individual dishes to choose.

OK, so I thought for ages about whether I should add a Not-So Allergy Friendly Restaurants Melbourne list to this post, but I felt that in the interest of balance and transparency, it was important to also share places where my experience has been less than exceptional.

I feel a certain sense of responsibility about not withholding information about places where you might face problems. In the end, you can make an informed and educated decision as to whether or not you want to eat there. Just like you would any other restaurant review you read 🙂

North and Eight used to be on my Allergy Friendly list until a close family member ended up in an ambulance and hospitalised within an hour of eating a meal there. While they were originally concerned, they ended up becoming quite evasive and defensive about the incident, so we have had to assume that there has been some breakdown in the processes in their kitchen such that the docket that said “NUT ALLERGY” has either been overlooked or some cross-contamination has occurred.

So, unfortunately, while I had no issues eating there, I feel the only responsible thing to do is take them off the Allergy Friendly list and put them on the Not-So Allergy Friendly Restaurants Melbourne. I would hate for someone else with a life-threatening allergy to eat there and face the same problem. P.S. my family member was VERY lucky and after being kept for observation is now much better. Like me, she now carries an EpiPen with her.

Patch Cafe describe themselves as “…Australia’s premier clean eating, paleo inspired food lifestyle brand.” and say that they are “For everyone!” Except if you have a nut allergy. I phoned Patch Cafe ahead of time and explained that I was planning on eating there and asked if they could accommodate my dietary requirements. They were quite polite but basically said they couldn’t make me a nut-free dish and that I shouldn’t visit their cafe. Fair enough. ?‍♀️

I had high expectations for the standard of service I would receive regarding my dietary requirements because eating at Bennelong is NOT CHEAP. I had advised them at the time of booking, prior to, and at the time of my reservation. They were certainly aware that I had food allergies, so that was not the problem, however, they were not very accommodating of them.

There was a set menu which, after removing the dishes that were not safe for me, left me with very slim pickings. They weren’t willing to make adjustments to dishes on that menu (i.e. leave off garnishes, adapt the dish etc.) and they definitely weren’t willing to go off menu to make sure I had some options. It was basically, eat what is left on the menu or go hungry. It was pretty much the exact opposite of the experience I had at Pope Joan (above). While the food I did have was delicious, it was an overall disappointing experience.

I’m always on the lookout for new places to eat. If you have had a particularly good experience at a café or restaurant with regards to a food allergy or intolerance let me know about it in the comments below.